Norman Thelwell (3 May 1923 – 7 February 2004) was an English cartoonist well known for his humorous illustrations of ponies and horses. Born in Birkenhead. Known to many only as Thelwell, he found his true comic niche with Pony Club girls and their comic ponies, a subject for which he became best-known, and which led to a cartoon strip about such a pair, Penelope and Kipper. He also illustrated Chicko in the British boys’ comic Eagle. 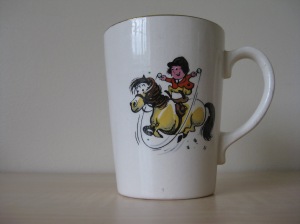