Quite a bit to sort out here!

The front shows the Scunthorpe Coat of Arms of Scunthorpe Borough Council.

ARMS: Vert a Chain of five links in fesse between in Chief two Shells (Gryphoea incurva) and in base a Garb Or.
CREST: On a Wreath of the Colours the Top of a Blast-Furnace issuant therefrom Flames all proper.

Motto ‘THE HEAVENS REFLECT OUR LABOURS’.
Granted 25th September 1936. The Borough Council was abolished in 1996. The green background and wheatsheaf reflects the town’s agricultural heritage and the two shells (Gryphoea incurva) is the fossil most commonly found in the ironstone of the area. The wheatsheaves also allude to the family of Sheffield which held the Manor of Kirton, of which Scunthorpe formed a part, Sir Berkley Sheffield was Charter Mayor. The towns’s Charter being one of only four granted dur­ing the short reign of King Edward VIII. The five steel links depict the original five parishes of Ashby, Brumby, Crosby, Frodingham and Scunthorpe that formed the town.
The blast furnace and the chain represent the iron and steel industries upon which the modern development of the town is based.
The motto comes from the frequent illumination of the sky which used to be a familiar sight at night time due to activity at the steelworks. It was previously used in its Latin form “Refulget labores nostros coelum“. 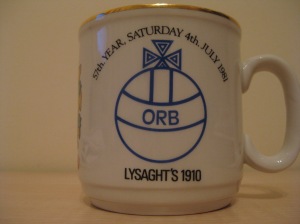 Orb is the name of Lysaghts Iron Works in Newport, Wales, opened in 1895. 1910 is the year that Lysaghts decided to build works in Scunthorpe, which opened in 1912. The significance of their appearance on the mug is not clear. 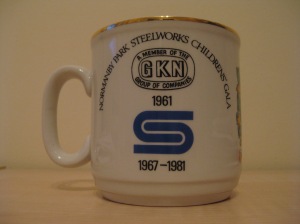 The Lysaghts works in Scunthorpe had been owned by GKN since 1955. The significance of the 1961 date is not clear. British Steel, the blue ‘S’ symbol, was created in 1967, when it acquired the Lysaghts Normanby Park works as part of the nationalisation of steel making. The Normanby Park works closed in 1981.